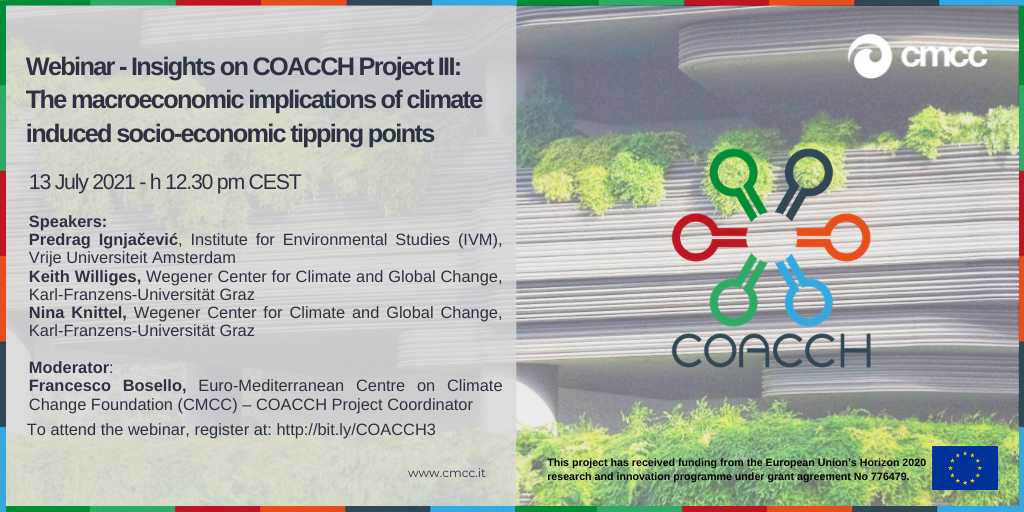 In 2020, the COACCH Project created a webinar series as a dissemination tool to share its outputs to the online community. The series is set to include four episodes. The first two episodes dealt respectively with climate change impacts on agriculture, forestry, fisheries and coastal areas, and on labor productivity and energy.

The concept of tipping-points in climate forecasting has received much attention over recent years. Well-known examples of these are levels of greenhouse gas concentrations and global warming where the melting of Arctic sea ice, the thawing of permafrost, or the changing Atlantic circulation becomes irreversible. A reasonably novel academic concept is a tipping-point in the socio-economic sphere, where a similar external shock may cause a socio-economic system to fundamentally change. Examples of this can be found in agriculture, where desertification may at a certain point cause land abandonment, or winter-tourism, where low-lying ski-resorts may become unprofitable due to global warming. Within the COACCH project, several such climate induced socio-economic tipping points were investigated for the EU, including the collapse of flood insurance markets due to extreme weather risks, climate induced economic shocks, and electricity system failures due to increasing occurrences of wildfires. Following the analyses of the potential occurrence and impact of these tipping-points, their respective indirect economic impacts are assessed. For example, a collapse of insurance markets for natural hazards may require governments to provide disaster aid, or individuals to use private savings to finance reconstruction after a disaster, both of which have further indirect economic impacts. Climate induced economic shocks such as large sudden losses due to extreme weather, which are measured using a novel metric called time of emergence of economic impacts (ToEI), cause changes in production factors and consumer behavior, especially when these shocks are persistent. Electricity system failures due to wildfires have significant indirect economic impacts on production, as an electricity supply failure may completely cease production in many firms. In the upcoming webinar Nina Knittel, Predrag Ignjačević, and Keith Williges will present the results of their research on these topics respectively.

Below are the details of the first two webinars: